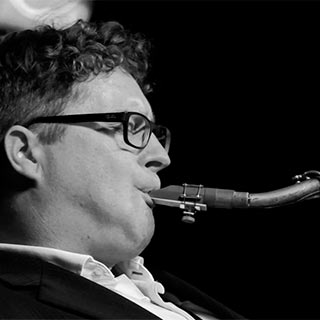 Anglo-American sax and flute player who has lived in the UK for over 20 years and has built up a great reputation for the power and ‘visceral excitement’ in his playing.

A protégé of Marcus Printup (Lincoln Center Orchestra) he came to develop a unique sound of his own that stands out in his many musical involvements.

He featured  with artists like Kasabian, Lack of Afro, Haggis Horns, Nitin Sawhney, This is The Kit,  Mr Benn, Chris Monkey and  I’m at the forefront of popular Bristol bands Phantom Ensemble,  Baila la Cumbia,  Dockside Latin Orchestra, Radio Banska and Dub From Atlantis to name a few.

As an educator he has been teaching for over 20 years with much of that time as assistant director of the highly acclaimed BlowoutSax School in Bath. He helped many of his  students into world famous music programs including Trinity, Royal Academy, Royal Welsh, Leeds School Of Music and Chethams School Of Music.

As these young musicians have come out of further studies, they have turned into working professional musicians in their own right!

He is  one of Headwind‘s recommended saxophone teachers and works closely with them to arrange equipment for his students when needed.