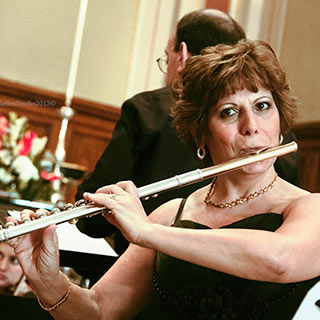 She won international competitions in Stresa, Rome, Belveglio and won the First Prize of the Cziffra Foundation.

Flautist of the orchestra of the European Community ( ECYO ) under the direction of Claudio Abbado, the orchestra ” i Pomeriggi Musicali ” in Milan and orchestra ” Soloists of Versailles” Daniela Pisano gave many concerts as soloist and chamber musician in France , Italy, Belgium , Switzerland, Germany , the former Yugoslavia , Romania and USA.

She is solo flautist of “orchestra italiana di flauti”, musical director of the Festival Opera Barga in Italy , and Artistic director of Stage Eurydice Ensemble founded in 1989 in Paris and with whom she gave many concerts. And with which she recorded for RIFI , Rusty Classica , Tirreno , Concerts Artists, RAI TV, Radio France , Swiss Italian Radio and Romanian TV.