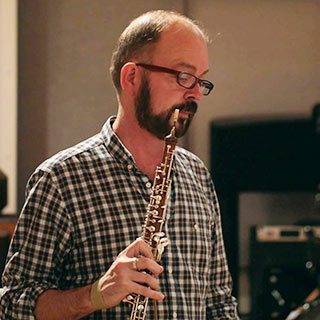 Paul  is one of the most progressive oboists of his generation.

He studied joint Principal Study, oboe and piano, at the Royal College of Music, London, to Masters level and at the University of California, Los Angeles. He then returned to the Royal College of Music where he completed his Doctorate, Increasing the Expressive Potential of the Oboe. The conclusion of this research contains six pieces composed for Paul by his friend and colleague, Michael Oliva.

Paul has appeared as a soloist in the United Kingdom, mainland Europe, Russia, North America, India and China and many of his performances have included a wide range of new music by living composers. In addition to his recitals with instrumentalists and vocalists, other performances have involved collaboration with sound engineers, visual artists, film makers and dancers. He has also made broadcasts and recordings for television, radio and theatre.

His solo CD New Ground, features seven world premiere recordings and was rated ‘excellent’ by BBC Music Magazine. This was followed by a disc of music by Edwin Roxburgh, Antares. This includes Silent Strings, a piece written for Paul and his duo partner Sally Mays, which was subsequently released on the 2CD set, The World of the Oboe. There are also two ensemble pieces featuring RNCM musicians, one of which was conducted by the composer. More recently, he recorded Gary Carpenter’s Double Concerto Doubles with Linda Merrick and the RNCM Wind Orchestra conducted by Clark Rundell.

Concerto performances include Heinz Holliger, Siebengesang (only performance since the piece’s premiere at The Proms), Witold Lutoslawski, Double Concerto (including performances with the composer). the first performance of Michael Oliva’s More bless’d than living lips, two performances of Gary Carpenter’s Doubles and Edwin Roxburgh’s Elegy for Ur.

As the oboist in rarescale, he has made recordings and premiered hundreds of works across the UK and in Europe. The ensemble have given the first performances of pieces written by composers including Michael Oliva, David Bennett Thomas, Michael Csanyi-Wills, Adam Gorb, Patrick Nunn, Edmund Jolliffe, Marc Yeats and David Curington alongside lesser-known pieces by composers such as Elliott Carter, Salvatore Sciarrino, Giacinto Scelsi and Kaija Saariaho.

He is also the oboist with the chamber ensemble Sounds Positive, with whom he has given over sixty premieres. Composers who have written for the ensemble include the Group’s founders – Avril Anderson and David Sutton-Anderson – and Judith Weir, John Lambert, Simon Bainbridge, Colin Riley, Michael Oliva, Edwin Roxburgh, Howard Skempton, Gerald Barry, Michael Finnissy, Timothy Salter, Jeremy Dale Roberts, Cecilia McDowall and Gary Carpenter.

Paul is an active composer and has written solo works, chamber pieces, a Triple Concerto for Oboe, Marimba, Piano and Chamber Orchestra and a Concerto, Hohler Fels for bass flute doubling alto flute, C flute and piccolo, two trios – each consisting of piccolo, tuba and amplified double bass – and large Wind Orchestra. The work was written for Karin de Fleyt, flautist with the Stockhausen Estate and was premiered and recorded in 2013.

From 1998 – 2006 he was Head of Wind, Brass & Percussion Faculty at Trinity College of Music, London, and a Council Member for the Society for the Promotion of New Music. In 2007, he commenced employment at the Royal Northern College of Music, Manchester, where he was initially Head of School of Wind, Brass and Percussion leading a department of 250 students and 100 part-time staff. During this time, he oversaw a significant expansion of an international team of staff, rewrote Principal Study requirements for all instruments in all Schools, and moderated assessment across the College.

In 2013 he was promoted to  Vice Principal (Performance), in which position he had overall responsibility for all aspects of performance at the College, from Principal Study through to Chamber Music and large ensembles. He also led the growth and diversification of The Platform, the College’s Centre for collaboration with external partners. Building on the long-standing relationships with the BBC Philharmonic, Hallé, Manchester Camerata, the Royal Liverpool Philharmonic and several brass bands, he created new opportunities for students to perform with world-class partners including the Chamber Orchestra of Europe, Netherlands Wind Ensemble, the Academy of Ancient Music, Northern Ballet and the Xi’An Symphony Orchestra in China. He was awarded Fellowship of the RNCM in 2013.

In April 2017 he relocated to the south of France and is now pursuing a freelance career of performing, composing, teaching, examining and adjudicating across Europe alongside artistic consultancy in China.

He is also External Examiner at Trinity Laban Conservatoire of Music and Dance in London.