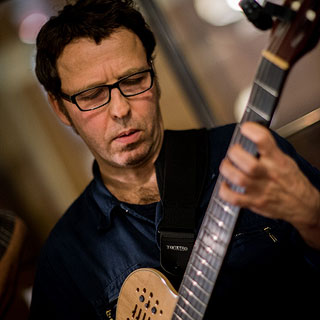 Music Theory – One to One

After discovering classical guitar at the age of 9 and a combination of being self-taught and taking lessons intermittently, Jean-Yves was drawn to the electric guitar, its repertoire and a desire to reproduce the music of his guitar heroes. This fuelled his curiosity for other styles of music based on improvisation and more complex harmonic frameworks such as jazz-fusion, Latin guitar and of course jazz, all the while continuing his playing of classical guitar. This passion for jazz has never left him and has allowed him to find a balance in his music making between classical and jazz.

Jean-Yves decided to devote himself entirely to the study of music. He obtained a Formation Professionnelle des Métiers de la Musique diploma at the Atla school in Paris, with jazz and Brazilian guitar as his main option. He then enrolled in the National School of Music and Dance in Pantin and obtained the Diploma of Music Study for jazz. At the same time he enrolled in the post graduate classical guitar class with Rosine Chabrun (former student of Alberto Ponce).

He has the opportunity to perform solo quartet, a repertoire ranging from I. Albeniz, F. Sor, J.S. Bach, R. Dyens … to Julio Pardo. He is a member of the guitar ensemble which plays with the Norma Basso choir and the Laurence Olivier dance company. This also gave him the opportunity to embark on teaching classical guitar. The discovery of teaching with the pleasures of transmitting, the richness of interaction as well as its inevitable challenges has built up and refined his pedagogy over time.

Even if the guitar has gained a reputation in classical repertoire, thanks to great performers such as A. Segovia from the 1930s and composers such as H. Villalobos, A. Aranjuez … it remains nevertheless a popular instrument with a multitude of different styles and cultures. It is this eclectic repertoire that he likes to explore and transmit to his students, including the practice of improvisation, which is often ignored by classical musicians. Consequently, Jean Yves specialises in: