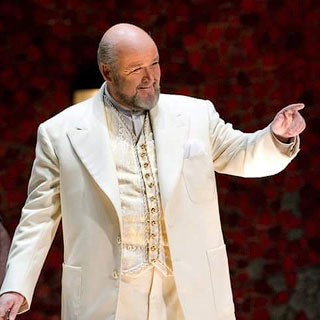 Born in Birkenhead Kim Begley first got his love of the theatre at the tender age of 19 as a wardrobe assistant at Chester Rep.

After studying Costume Making at the Wimbledon School of Art, he went on to enjoy a decade-long career as an actor, including two seasons with the Royal Shakespeare Company, before pursuing vocal studies at the Guildhall School of Music, the National Opera Studio, and before joining the Royal Opera House Covent Garden as a principal tenor where he sang over thirty roles, working with all the great artists, directors and conductors

Covent Garden featured strongly throughout his freelance career, and he has returned there regularly as a guest artist and most recently in Kasper Holten’s production of Krol Roger conducted by Sir Antonio Pappano.

From his first summer in the Glyndebourne Chorus in 1982, Begley went on to debut several of his key roles at the Glyndebourne Festival including Boris Grigorjevic in Katja Kabanova (1988), Laca in Jenufa (1991) and Albert Gregor in Makropolous Case, Jenik in the Bartered Bride(1995), all under Nikolaus Lehnhofs’ direction leading to an enduring collaboration in over twelve productions Internationally including the title roles in Lohengrin for Frankfurt and Parsifal for English National Opera, which earned him an Olivier nomination.

In 2001, Kim Begley sang his first Florestan under Sir Simon Rattle in Deborah Warner’s new production of Fidelio at the Glyndebourne Festival, and he joined Vladimir Jurowski there in the summer of 2017 as Polonius in the world-premiere of Brett Dean’s Hamlet.

Begley became a regular guest artist at the Metropolitan Opera New York where he sang Laca, Pierre, Captain Vere and Herod among others. During his career he enjoyed many successes at La Scala Milan, Berliner Staatsoper, Opera National de Paris, San Francisco Opera, Liceu Barcelona, Dutch National Opera and Lyric Opera of Chicago to name a few. He debuted as Loge/​Das Rheingold at the 2000 Bayreuth Festival under the late Giuseppe Sinopoli and kept that role close to his heart for the rest of his career, singing it latterly under Andris Nelsons at the 2017 Tanglewood Festival and leaving it immortalized on two recordings, with Christoph von Dohnanyi (Decca) and with Jaap van Zweden (Naxos). Begley features on many other recordings and DVDs including Salome, Makropolous Case, Leonore, and Busoni’s Dr Faustus which won him and the recording Grammy awards in 2000.

Kim has always maintained an interest in directing theatre, opera and musicals alongside his singing career.

He has run festivals, founded the Kent based Broomhill International Opera Course and enjoyed teaching and promoting young singers.

He plans to spend more time directing and designing his own productions, having adventures with his wife, the soprano and teacher Elizabeth Collier, and following the careers of his two musical sons Ed and Will.