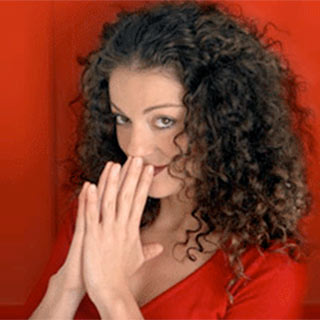 Jazz vocal – While busy with her professional life as a performer Letizia carries on teaching, which she enjoys. Transmitting music to her students is an essential part of her life. She remains convinced that her role is to give them the keys for a long journey requiring total self-investment.

Jazz is an attitude. Letizia started learning classical piano but she was surrounded by jazz all her childhood. Singing became her world.

Soon she discovered improvisation through listening to recordings, which she says were her true masters. She also attended several courses in France (given by Anne Ducros, Michele Hendrix, Marc Murphy). Then followed professional training at the Berklee College of Music, Boston, USA, where she won a University scholarship. There her dream came true, studying voice technique with Vivian Reed as well as harmony, writing, and composition. She took part in several Jazz, Gospel, Brazilian and Indian music workshops. These contributed substantially to the enrichment of her repertoire and to the refinement of her style.

Back in France (1998) Letizia gave her first performances in many Paris clubs – the Bilboquet, the New Morning, the Sunset, the Petit Journal, the ‘Caveau de la Huchette’, where she met some of the best known jazz professionals. After giving proof of her own professionalism, she joined the «Family» and also performed at private evenings and functions, as well as in many fashionable venues in Paris (Reservoir, Opus Café, Westminster, Ritz, Man Ray….).

She very soon attracted attention and, thanks to her versatility, was quickly in great demand for festivals and received offers to tour with African, Malagasy, Venezuelan and Brazilian musicians.

She has created a double act, « Bloody Merry », with Valerie Benzaquine (who also teaches piano jazz on the course) where she is able to express herself with most freedom. Their lengthy cooperation culminated in an invitation to the vocal jazz festival at the « Sunset », where they made a name for themselves, thanks to the originality of their intimate formula and compositions.

The « Bloody Merry » are making a new album, and Letizia is also producing another album, on the funky side.

“One must listen to masters” says Letizia, (ELLINGTON, BASIE, LESTER YOUNG…SARAH, ELLA…….) and immerse oneself in this world through their recordings …know all about them, and of course love it.»

One of Letizia’s friends says that jazz is an attitude. She shares that feeling: Immerse yourself in it and you will be ready to learn.

Letizia says : ‘ I’d like students registering with me to bring along a recording machine to record their classes , some music paper and two jazz pieces of their choice, which they should prepare beforehand.’