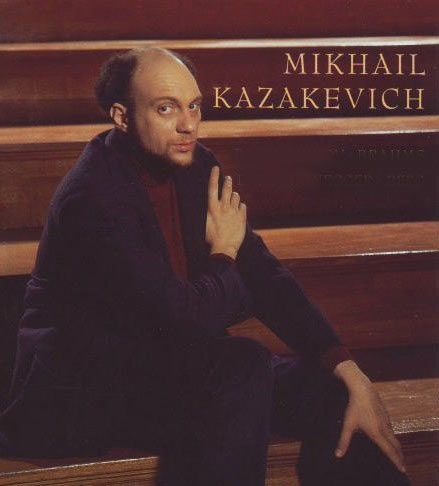 Immediately after graduating with the highest honours, Mikhail joined the professorial staff at the conservatoire and taught there until 1992 when his burgeoning performing career led him to the West.

Prior to his appointment at the Trinity Laban Conservatoire of Music and Dance, London , Mikhail was a professor at the Welsh College of Music and Drama in Cardiff.. He also teaches masterclasses throughout the UK, and he serves as an adjudicator for piano festivals and competitions.

As a result of his sensational performance at the International Schubert Competition in Dortmund (Germany), Mikhail Kazakevich was engaged in playing several concerts with the Dortmund Philharmonic orchestra, and also gave numerous solo recitals in Germany and France, where he received a Special Award from the Schubert Society (Germany) and a Special Prize from SACEM (France) for the performance of 20th century music. In 1993, he made his debut at the Wigmore Hall (London) and soon afterwards was signed exclusively by the BMG/Conifer recording label, for which he has made world-wide acclaimed recordings of music by J.S. Bach, L.v. Beethoven (the world premiere recording of the composer’s final versions of the Second and Fourth concertos with the English Chamber Orchestra under Sir Charles Mackerras), Alban Berg, Frédéric Chopin, Gustav Mahler (Kazakevich’s own arrangements), Sergei Rachmaninov, Schubert and Robert Schumann.

Mikhail Kazakevich has played solo and with orchestras at prestigious venues and festivals in Austria, Germany, France, Russia, Switzerland, Denmark, South Korea and the Middle East. In the UK, he has given numerous recitals at London’s Wigmore Hall, St John’s Smith Square, the South Bank Centre, and has made many live broadcasts for BBC Radio 3 (most recently in May 2004) and BBC 1 Television. He regularly performs at the Brighton Festival and the Newbury Spring Festival – most recently, with the St. Petersburg Philharmonic Orchestra and the Bournemouth Symphony Orchestra, playing S. Rachmaninov. Among his latest projects was a performance and recording of J.S. Bach’s 48 Preludes and Fugues (Well Tempered Klavier) at the famous St George’s, Bristol. Last season, Mikhail made his return tours to Denmark and Russia, playing W.A. Mozart’s concertos with the Chamber Orchestra of Europe under Moshe Atzmon and the Russian National Philharmonic Orchestra under Vladimir Spivakov. His forthcoming dates include appearances at the Newbury Spring Festival, London’s St John’s Smith Square with the Chamber Orchestra of Europe and a solo recital at the Moscow Kremlin on the special invitation by the Presidential Executive Office of the President of Russia

“… One of Russia’s best-kept secrets’ is how they like to promote him and for once it’s true.”

“Of the floods of musicians from the CIS now filling the concert halls and recording studios of the West Mikhail Kazakevich is one of the most worthy of listening time.” – The Times (UK)

“This artist claims a place with the greatest, Kazakevich is sharing the composer’s thoughts with himself and we are privileged to overhear them.” – Classic CD (UK)

“He has a natural feeling for the virtuosic pianism and fervour of Schumann, together with inwardness and poetic insight. Indeed, his is one of the finest accounts of the (Schumann) G minor sonata and Symphonische Etuden to have appeared in recent years” – The Penguin Guide to CDs, USA – UK

“…Playing with expected Russian brilliance, coated by major concern for eloquent elegance. If you enjoy Gilels’ playing, you’ll adore Kazakevich… his technical security is amazing and his rhythmic stability definitive…in matters of style, Kazakevich is beyond criticism… the variety of timbre colouration in his playing is surprising …Kazakevich strikes as not only a sensational pianist but a major artist of high integrity.” – In Tune, USA-Japan