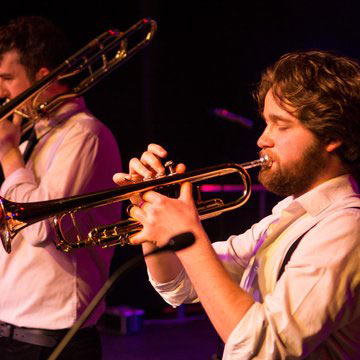 Oliver Chubb began his musical life as a chorister at Portsmouth Cathedral, founding a lifelong love of music. Having completed his undergraduate degree in Music at the University of Bristol in 2017, he is now a freelance trumpet player and singer based in Bristol.

Oliver began learning trumpet at the age of six with the intention of “making people’s ears explode” – audiences will be pleased to know he has long since abandoned this desire.

As a young trumpeter he performed with several regional and national ensembles and participated in masterclasses with world-class performers such as Crispian Steele-Perkins and Stephen Sykes.

In his Ninal year at the University of Bristol, he was awarded the JH Britton Award and the Performance Prize by the Music Department.

Since leaving University, he has given several public trumpet recitals across the South, and has played on BBC Radio 4 and regional radio broadcasts.

Oliver is in demand as a session player for numerous function bands and classical ensembles in the South West, and he enjoys playing funk and jazz with his function band, the Octotonics.

As a singer, Oliver has held choral scholarships at Bristol and Wells Cathedrals, and is currently a Lay Clerk at Bath Abbey. These positions have given him the opportunity to be involved in several radio and television broadcasts, as well as recordings and international tours. He has sung under the batons of Sir Simon Rattle and Marin Alsop at the BBC Proms in 2015 and 2016 respectively. More recently, he has been in demand as a soloist for many local choral societies, and in November 2019, he sang with the Berlin Radio Choir in the Berlin Philharmonie under Robin Ticciati

Oliver enjoys teaching students from all ages and walks of life, and is passionate about encouraging a love for music from all his students. He is well-versed in trumpet technique and music theory, and he focusses on how to combine this understanding of the theory to make his students’ musical expression more lyrical and colourful.

G.Gershwin arr Turrin “Someone to Watch over Me”