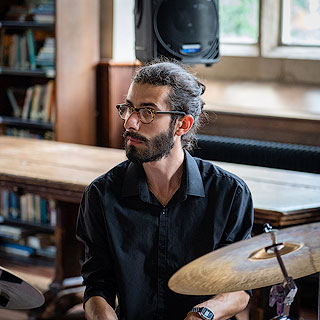 Paolo Adamo is an Italian, Bristol based jazz drummer and session musician.

Paolo grew up in a tiny village in the Italian region of Molise called Mirabello Sannitico. Being raised in a musical environment, he showed an interest in music early on and particularly a very profound love of the drums. Soon after he turned 10, his father exposed him to Jazz music and he began listening to John Coltrane, Miles Davies, Elvin Jones, Joshua Redman and Brian Blade. Elvin Jones and Brian Blade have become 2 of his main influences since then. His father then signed him up at the “Thelonious Monk Jazz Accademy” of Campobasso which he attended for 9 years. In this time he studied with drum tutors such as Donato Cimaglia, Antonio Conte and Alberto Romano.

He was selected for 6 consecutive years to attend the JazzPuzzle, a prestigious jazz course that was held in the city of Mouscron, Belgium.

Shortly after he turned 19, he decided to relocate himself to follow his dream of being a musician, and in 2012 he moved to Bristol.

Since then, he studied and played with most of the jazz musicians living in the UK including. He’s currently in high demand as a jazz musician in the UK.

Paolo is an experienced teacher currently teaching in schools near Bristol.

Paolo focuses his teaching on how to approach the drum kit with musicality and sensitivity. He is well versed in the rudiments of drum technique but is able to offer expertise in interpretation of music and expression on the drum kit. This approach often involves the practice of listening to and playing along with music because it is an excellent way to learn jazz language but Paolo is also adept at offering various exercises and technical studies for students to aid in their development.

He teaches in English