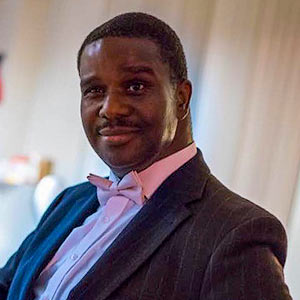 He began his music career at the age of eight in the Prince Georges County Honours Choir; singing in Washington DC at the Kennedy Centre for Performing Arts and eventually went on to study voice with such renowned professors of music such as Thomas Carey, Samuel Bond, and Marsha Henderson.

Robert won a coveted space in the Opera Academy of Rome during the summer 1999 and has appeared in Master Classes presented by such great artists as Mignon Dunn.

He received his Bachelors of Arts Degree (Vocal Music Performance) at the University of Oklahoma, Norman Oklahoma.
Then he went on to receive a first class honours certification in Education from Catholic University of America, Washington DC. Robert also participated in an intensive year study of music, culture and language at University Blaise Pascal in Clermont-Ferrand, France.

Just recently he completed a course of study in Theology from the University of Wales.

Robert’s career has taken him throughout the world performing in many operas and productions including: Die Fledermaus, Die Zaubefloete, Eliser d’Amore, Pirates of Penzance, Hand of Bridge, The Crucible, JACK (world premier), Susannah, Porgy & Bess, Amahl and the Night Visitors, and Hansel and Gretel.