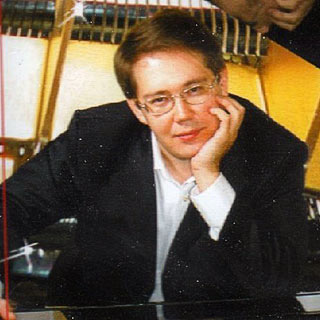 Roustam Koudoiaroff was born in Kazan, Tatarstan, Russia. He studied at the Kazan State Conservatoire with Prof. N. A. Fomina and graduated in 1993. He then continued his postgraduate degree at the Moscow Tchaikovsky Conservatoire with the renowned pianist, Nicolai Petrov.

He has appeared with recitals and concerts with many symphony and chamber orchestras throughout Russia, Ukraine, Germany, Spain, Greece, South-African Republic, Great Britain and Denmark. He possesses a wide range of repertoire in solo, chamber and concertos ranging from Baroque to Modern and has also premiered performances of new and “forgotten” music, such as chamber and piano music by Richard Dubugnon, piano quintets by Frank Bridge, Ralph Vaughan Williams and music of Croatian composers.

Roustam Koudoiaroff broadcasts regularly with the Radio and TV corporations in Russia.

His first CD was released by Classical Records in 2005 and consists of works by Sofia Gubaidulina, Liszt, Chopin and the premiere recording of the Three dances op. 20 by Richard Dubugnon.

“Extraordinary talent, with sensational touch, sound and tone colour,  possesses complete control with discreet shades of dynamic effects in a sober and vivid way, never presumptuous, always in accordance with the music, as displayed in Beethoven’s Sonata in D minor 0p.31No.2 as well as The Romances op.28 by Schumann… The Polonaise in E Major by Liszt was a sheer equilibristic show-piece, balanced in a wondrous and subtle leggier…” Tore Mortensen, Nordjyske Tidende

“Impeccable style and the highest sense of virtuosity, capable of winning over any listener… from tiny decorated beads to stunning cascades of chords and octaves just seized one’s breath.  Everything was subject to one purpose; addressing higher artistic goals.” Simbirsky Courier