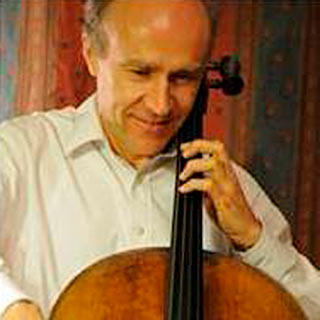 Born in Plochingen/Stuttgart (Germany ) in 1953, Stefan discovered happiness while « making music » within his own family at an early age.

His musical abilities were recognised at the age of 10 and he was invited to join the two orchestras in his native town of  Marburg, the Gymnase and Kammerorchester, as First Cello.

When 13 and 15 years old he entered the  Bundes-wettbewerb “Jugend musiziert competition and won his two first prizes for cello solo and for Trio with piano.

He then went for further studies in Detmold with André Navarra and in Freiburg with Prof. Christoph Henke.

At 23 he was invited to play as leader of the cellos in the “Südwestdeutsches Kammerorchester Pforzheim” under Paul Angerer.

Two years later he was invited by Rafael Kubelik to join the “Symphonieorchester des Bayerischen Rundfunks” in Munich. He stayed there for 6 years.

His life was enlightened through meeting great artists of this period – amongst them Leonard Bernstein – with whom he formed a relationship that had a serious influence on his life,  Mstislav Rostropovitch, Giulini, Celibidache, Ozawa, Muti etc. All helped to nurture his passion for playing and teaching the cello.

In 1984 he became First cello in the ’OSR, Suisse Romande Orchestra in Geneva /Sutz.

He also performs with the Bachcollegium München, the Südwestdeutsches Kammerorchester Pforzheim and other orchestras. He also plays in chamber music groups and especially with his pianist brother Leonhard Rieckhoff.

His philosophy of music and the cello

In his teaching he uses:

His philosophy in brief: Your instrument is your best friend for life

What Stephen thinks about music

What you need to be a musician:

You need to be able to listen

You need to imagine what is meant

You need to desire to live the music

You need to avoid unnecessary movement, gestures, muscles that block this path

You need to practice perfect movements

You need to assume that each note will be perfect

You need to breathe so as to accompany the singing which is within you and so as to give yourself the utmost energy when singing.