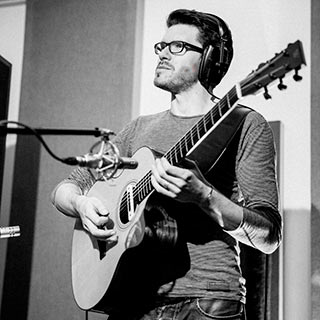 Steve teaches guitar and Jazz Improvisation for all instruments. Emphasis is placed on self-expression through solid foundations of rhythm and harmony (including triads, arpeggios, chords, etc.) from which phrasing and narrative can develop. Focus on musical elements such as listening, feel, dynamics and tone are also explored. Each student is encouraged to practice with effective and enjoyable methods that build confidence and independence.

Steve studied at Leeds College of Music with Jez Franks and with Wayne Krantz in New York.  He has also studied with Mike Walker since meeting him in 2002.

Steve has been teaching professionally since 2004. Alongside private tuition he currently teaches at BIMM Bristol including a weekly improvisation module for all instrumentalists. Steve is an inspiring teacher with extensive experience in individual and class tuition, having designed and taught the guitar course on the (BA) Hons Popular Music Performance at Southampton Solent University for seven years, and as resident guitar tutor on the LMFL International Jazz Summer School since 2009. Steve is also the editor of www.practisin2play.com – an online guitar tuition site led by guitarist Mike Walker.

Steve has recorded and performed with Sara Colman’s Quintet across the UK and at the Jazzahead! festival in Germany. He was featured guitarist on The Colman Brothers album reaching No.4 in the UK iTunes Jazz chart followed by performances including Manchester Jazz Festival.  He has also performed in the Tony Smith Band at UK venues including Pizza Express Jazz Club, Soho, with Sylvan Richardson and accordionist Karen Street amongst others. Steve is currently rehearsing his new quintet based in Bristol, UK