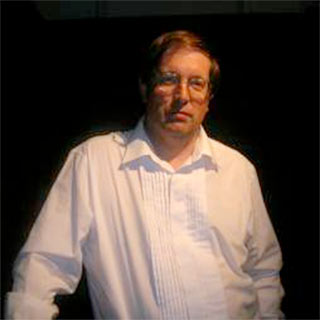 William was born in London and was a student at the Guildhall School of Music and Drama where he learned piano and composition. A musician for all seasons he plays cello as well and jazz is also amongst his talents.

In 1976, after a period of study at Oxford, he started teaching, and was Head of Music at Highfield School in Liphook until the fall 2009 ; He has trained various choirs in the South East, from Twickenham to Haslemere, as well as conducting the Dolmetsch Summer School Choir for some years.

When he is not teaching, he pursues a career as a composer, having written music for television, theatre and the concert hall.

His ŒFolia Variations¹, commissioned by the organist Christopher Herrick, were premiered in 1985 at the Newbury Festival and broadcast on Radio 3; his Requiem has been sung frequently in London, Paris, Norway and elsewhere. His stage musical ŒInjuns¹, a wild-west re-working of The Tempest, was published in 1994 and was recently revived.

He has written several other stage musicals, cantatas for children, 3 suites for school orchestras and the music for the BBC drama series, ‘The Little World of Don Camillo’. His piece for narrator and orchestra, ‘Aladdin and the Magic Lamp’, a Southern Orchestral Concerts Society commission, was premiered in Spring 2002. Last autumn he had an opera and a choral symphony premiered within a fortnight of each other.

For relaxation he plays music of the 20s and 30s with the Add Hock trio and performs in cabaret with Hampshire MP Michael Mates.